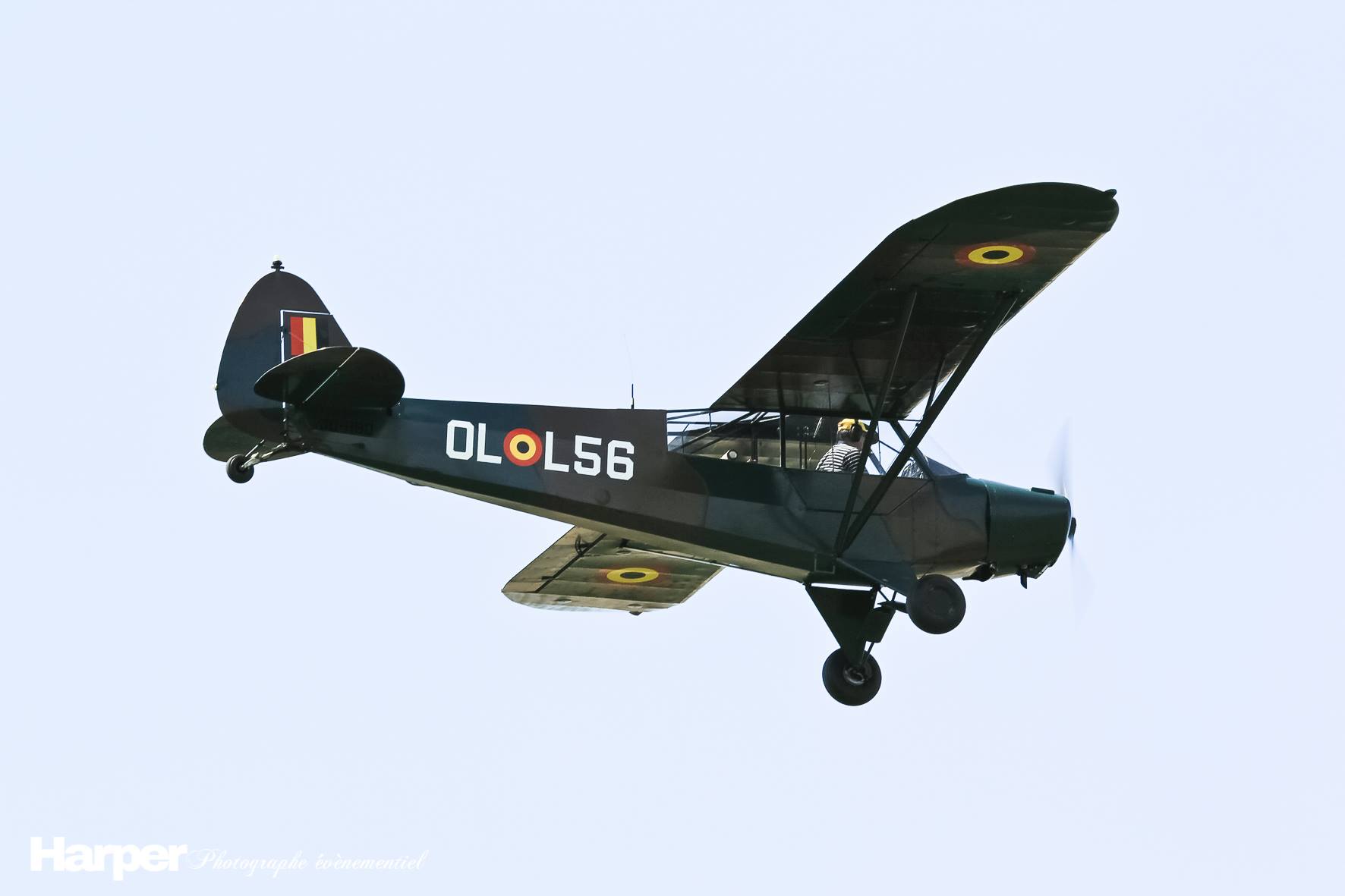 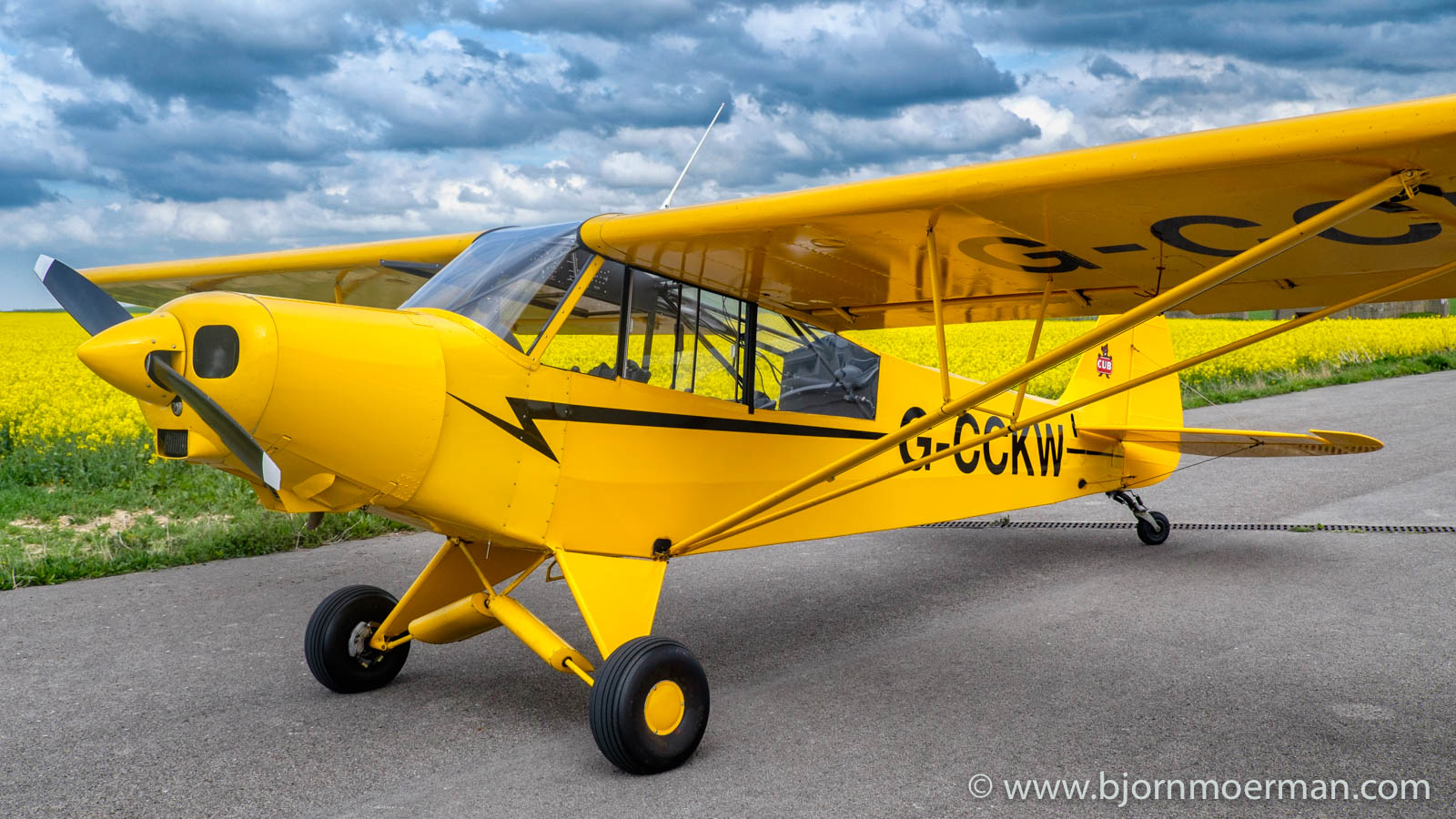 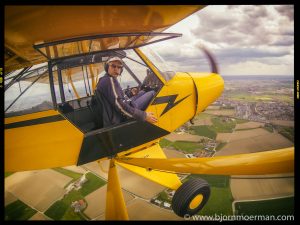 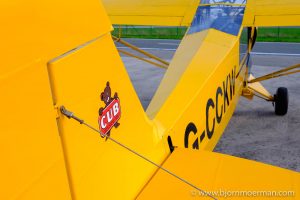 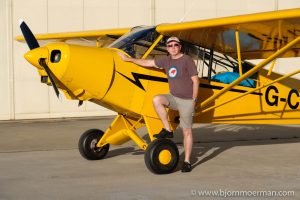 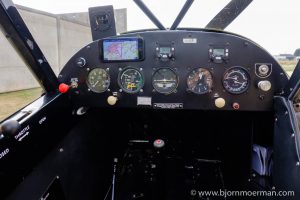 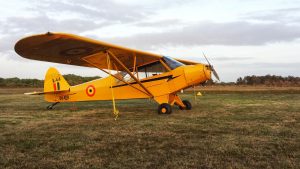 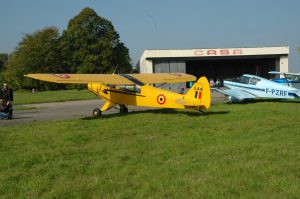 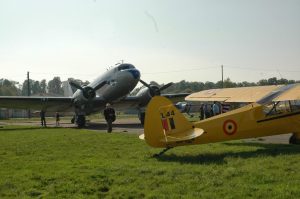 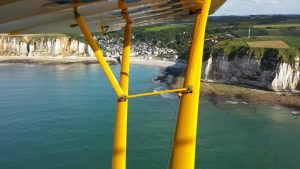 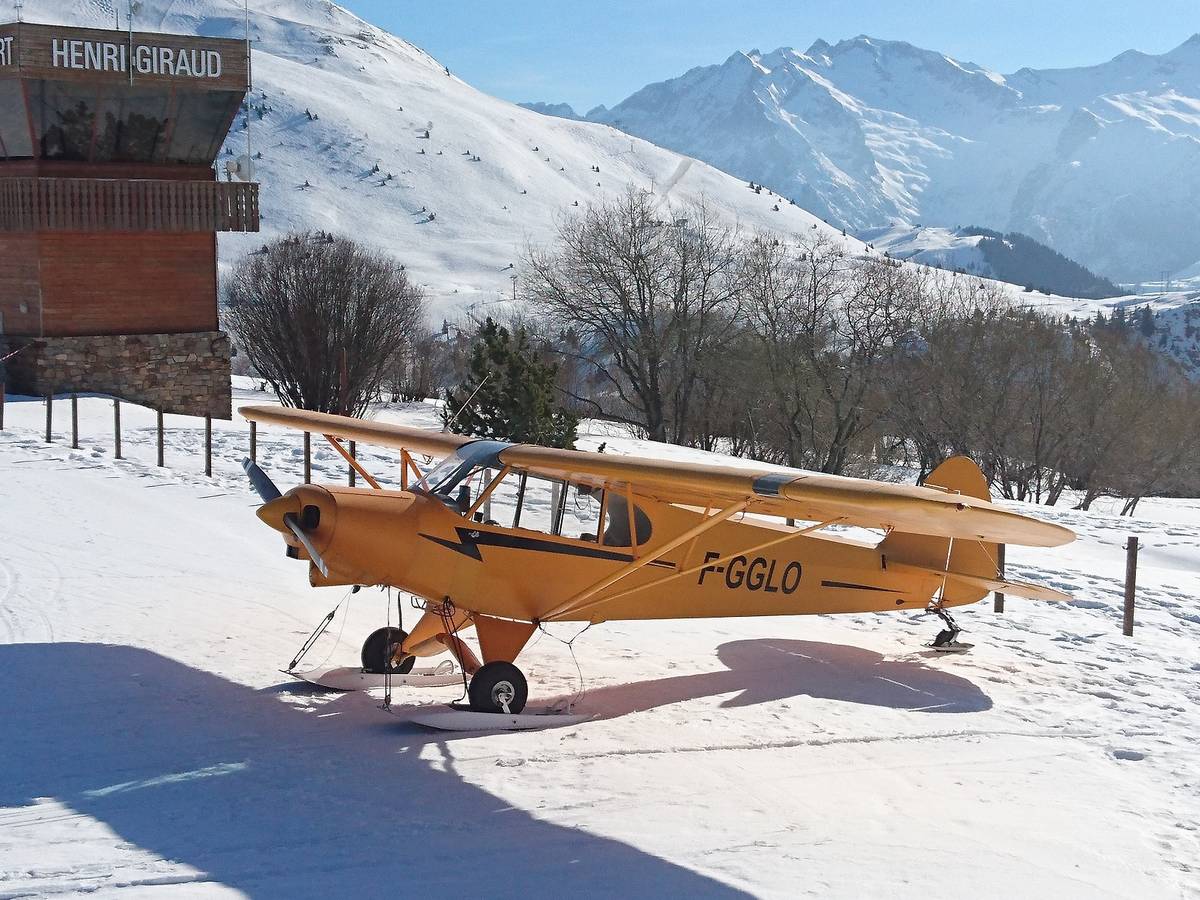 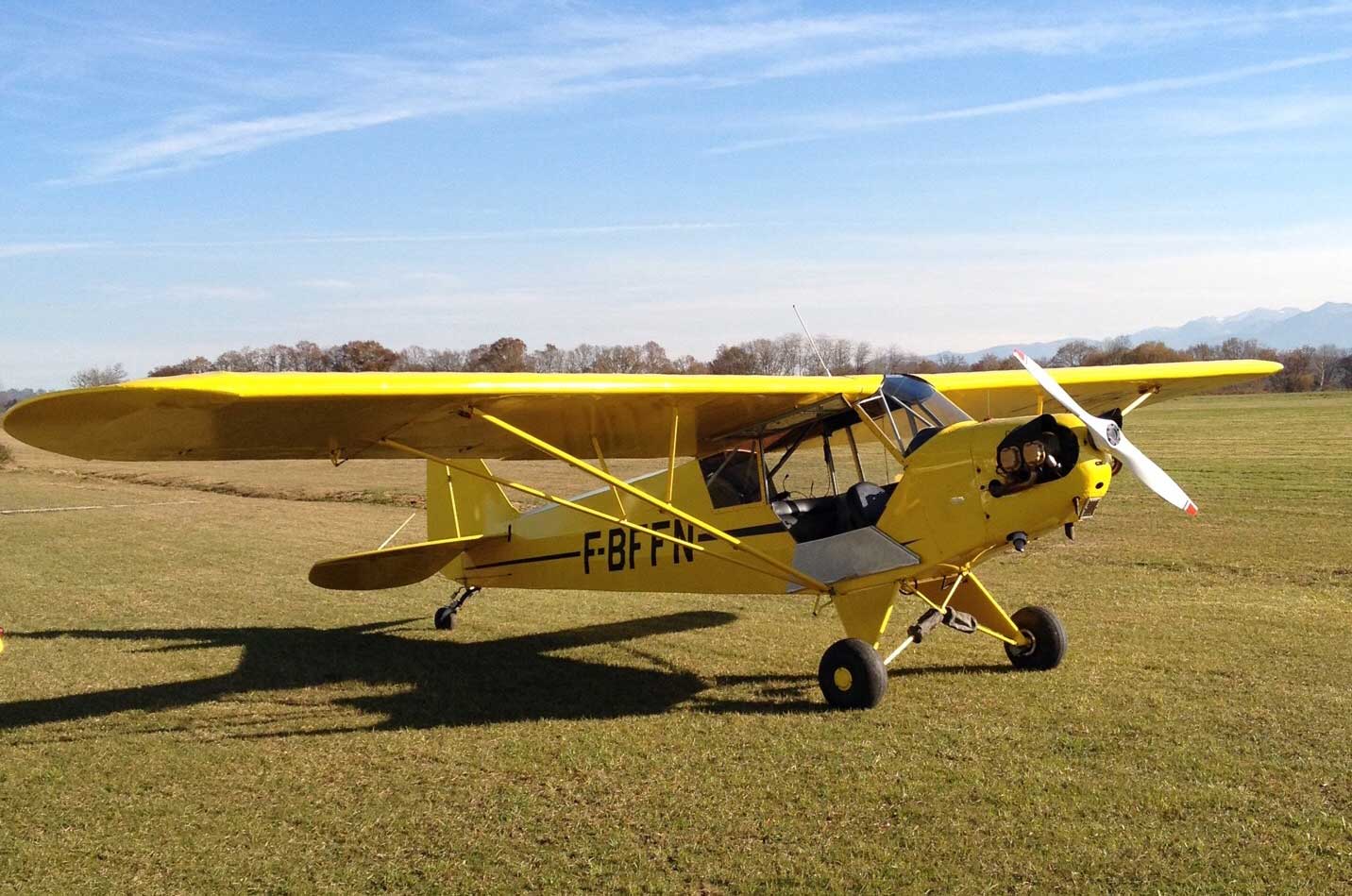 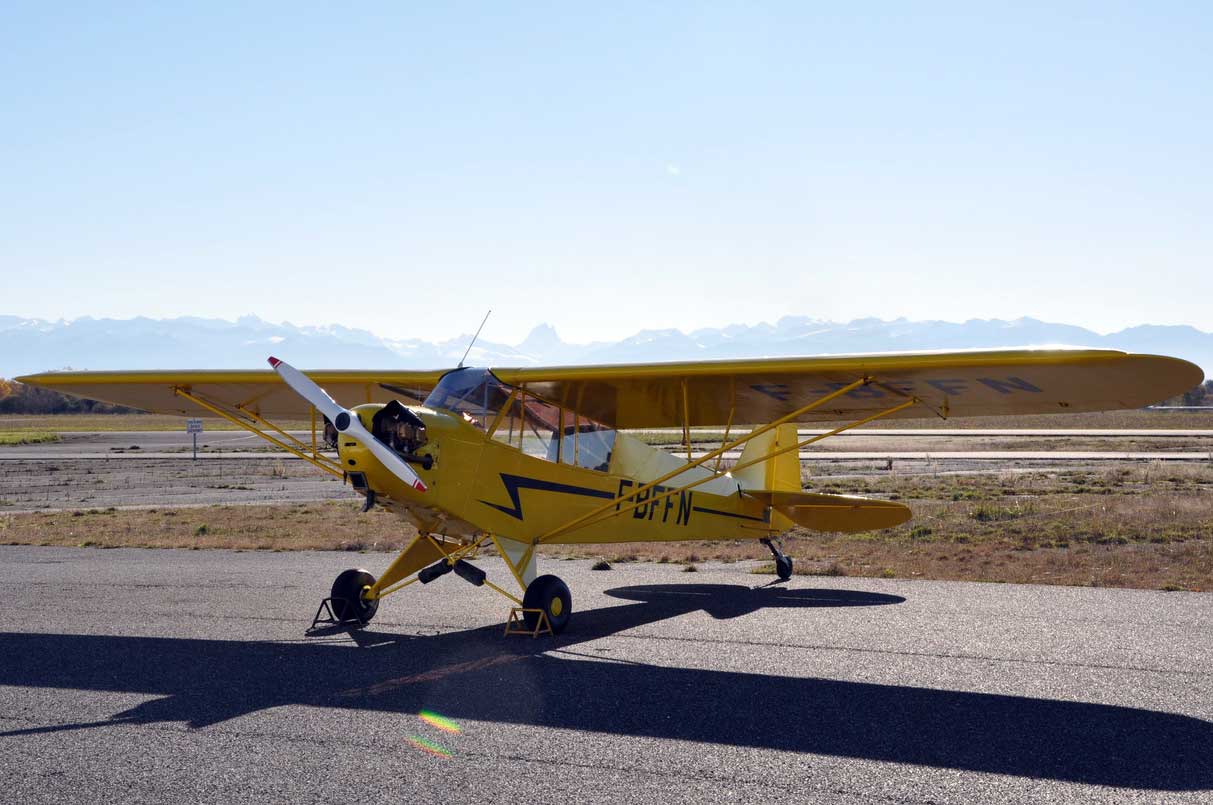 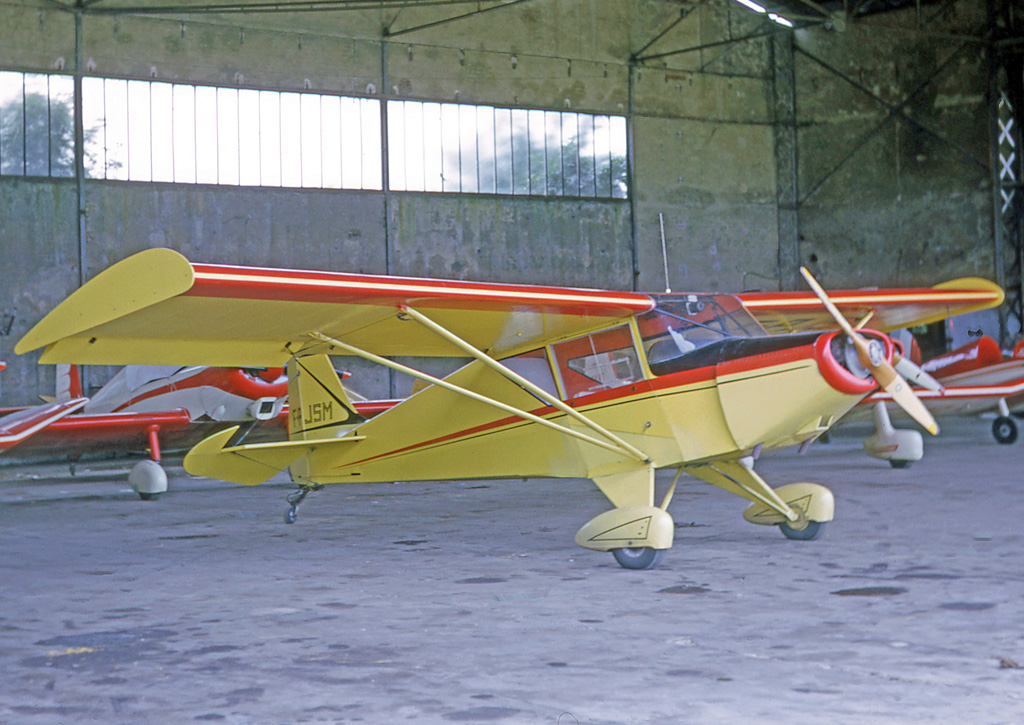 SPECIAL CHARACTERISTICS OF THE L-14 PROJECT

– Was the first Piper aircraft to be fitted with flaps and slats.

In 1943 the Piper Aircraft Company of Pennsylvania was given the assignment by the US Army to design and build an ambulance aircraft. To meet the requirements of the contract they used the J-5C model as a starting point.

The Approved Type Certificate, ATC-760, was obtained by the Piper Aircraft Company on 31st July 1945.

The completed L-14, with the cabin area fitted with Plexiglas and with slats, flaps and heavy duty shock absorbers, flew for the first time on 29th February 1945. This was followed by the production of 5 aircraft, s/n 5-3001 to 5-3005, which were given the designation YL-14. The US Army then placed an order for 850 aircraft but these never went into production due to WWII coming to an end.

Howard Piper was the project engineer with Dave Long as the chief designer. Tom Piper was in charge of flight testing with Clyde Smith Sr as the test pilot.

One of the peculiarities of the L-14 is that it was the first Piper aircraft to have flaps. These could be lowered up to 40° at which the stalling speed, with power, was just 20 knots, this being facilitated additionally by the slats, the first time these too had ever been used on a Piper aircraft.

The undercarriage, with large, low pressure 600 x 6 tyres and a robust Scott tail skid, was designed to a precise requirement of the US Army for it to be able to absorb major impacts when operating from rough, unprepared strips.

After the production of the initial five YL-14s a batch of nine L-14s was ordered making the total production run of this rare aircraft just fourteen.

At the end of WWII the US Army returned the initial five YL-14s (s/ns 5-3001 to 5-3005) to the Piper Aircraft Company which together with the subsequent nine L-14s (s/ns 5-3006 to 5-3014) were given civil registration numbers and were sold to private individuals and companies. Of this total of fourteen aircraft, today just one survives in airworthy condition: s/n 5-3007.

After the initial test flights this aircraft was then sold, following the cancellation of the bulk order by the US Army, to the Falcon Flying School of Miami, where it was given the civil registration NC-41594. This was early in 1946.

Not long after, on 12th March 1946, it was sold and exported to Cuba where it was re-registered as CU-P18 and based at Santa Fe airport just outside Havana. Shortly afterwards it was acquired by a Cuban firm, Auto Moderno S.A. and re-registered as CU-N18.

In April 1947 the aircraft was bought by a Spaniard, Don Jose Luis Lopez de Carrizosa, the Marquis of Merito, who shipped it to Spain where it was registered as EC-AAP on 10th May 1947. It then flew for his company, AEROTECNICA S.A.

On 2nd April 1952 it was sold to Doña Maria Victoria Puentedura Ojea and flew with the Malaga Aero Club.

On 6th August 1955 it was bought by Don Manuel Lopez Manteola who took the aircraft to Asturias.

It was then sold again, on 25th January 1956, to Don Antonio Figaredo, who continued to keep it at Asturias until, its flying days almost over, it was transferred to Leon for a complete overhaul which, in fact, never took place.

In 1989 it was found there, in Leon, by its present owner who, in 1994, moved it to Burgos in order to restore it to a state of complete airworthiness.

Constructed by Piper and registered on the 18th December 1945, construction number 5-3007, USAAF number 5-55531 and soon after sold on the civil market as NC-41594 as the contract for 850 examples of this type for the USAAF was cancelled, on the 12th March 1946 this Piper l-14 was exported to Cuba as CU-P18, later to become CU-N18 before being exported by sea to Spain on the 10th March 1947. The new owner being the Marques del Merto, D.Jose Lopez Carrizosa with the new Spanish registration of EC-AAP, the aircraft flying around Spain and North Africa on the owner’s company business, Aerotecnica de Sevilla, subsequently sold on to Dona Victoria Puentedura Ojeda of Malaga on the 2nd April 1952, then to D.Manuel Lopez Manteola on the 6th August 1955, D.Antonio Figaredo Sela is recorded as buying the aircraft on the 25th January 1956 and then finally on the 19th January 1995 D.Jose Luis Olias of Burgos obtained the aircraft after much negotiation.

Between 1947 and 1957 the aircraft flew all over Spain and North Africa (Morocco) publicising a well know drink, this included banner towing before its long storage sheltered within a dry hangar in Leon, when in 1995, the aircraft was recovered by road to Burgos and the detailed restoration was begun.

The registration, EC-AAP is now the first registration to be found within the Spanish aircraft registration records, EC prefix, and is the only Piper L-14 Army Cruiser in the World. A truly unique aircraft restored to the highest standard, flying again after 46 years.

For the owner, D.Jose Luis OLIAS, who was recently elected the President of the Royal Aero Club of Spain (Real Aero Club de Espana), one the oldest and most prestigious Aero Clubs in the World, the year 2003 will be long remembered as the year when all his hard work and dedication brought the reward of being able to fly his own aircraft which he restored himself along with the help of many people from all around the World.

In 1943 the Piper Aircraft Company undertook to design and build for the United States Army Air Force (USAAF) an aircraft ambulance. After studying the specification it was decided to base the design on an existing model, the Piper J-5C, the first prototype was built using an existing Piper J-5CO (O for Observation), this first aircraft being given the serial number (SN) 5-1387 and the registration: NX41552. The most noticeable change being the reconstructed upper fuselage, a large dorsal addition to cater for stretchers. Otherwise the aircraft was unchanged, including the engine which remained as in the Piper J-5C, the Lycoming 0-235 producing 100 hp.

First flight was on the 16th June 1943 and after satisfactory flight trials from October of that year and into 1944 major modifications were made including larger windscreen and glazed areas, long landing gear shock absorbers, increased fin height and size, and a first for Piper, full span slots on the wing leading edges, generous flaps were also incorporated, another first. This aircraft was now designated the Piper J-5D.

In 1944 a second prototype was converted from another J-5C, registration NX33529, now designated as a Piper L-4X, in line with the military series of ‘L’, with the

SN 5-3001, the first flight being on the 9th September 1944. All the changes were incorporated into this aircraft along with a larger engine, Lycoming 0-290-A giving increased power.

The definitive and complete Piper L-14 incorporating all the changes including large glazed area, turtle deck, slots and flaps, and undercarriage shock absorbers was

The production of five examples was completed for service evaluation, these aircraft were designated YL-14 with the serial numbers from 5-3001 to 5-3005.

The two original prototypes were modified to the same standard as the production examples, YL-14, and the service trails commenced in May 1945, the newly built Piper YL-14 were delivered in June of the same year, these last with the recessed slots, flaps and glazed, removable turtle deck which permitted a stretcher to be loaded, similar to the Naval models designated HE-1/AE-1.

The USAAF issued an order to build 850 examples of the Piper L-14 Army Cruiser.

Howard Piper was the engineer for this project, Dave Long the chief of design and Tom Piper the chief flight test pilot with Clyde Smith Senior, the pilot involved with the test flying and evaluation during the whole production run. It was found necessary to increase the wingspan by three feet outboard of the leading edge slots to improve flight handling.

The construction and dimensions for the L-14, now named ‘ARMY CRUISER’ was very similar to the Cub Cruiser or Super Cruiser, except for the larger engine and the changed interior to accommodate the stretcher. Alloy steel tube fuselage, aluminium alloy spars with aluminium ribs, fabric covered, wing struts, bracing wires for the tail surfaces, all standard for the pre-War Piper models.

The one big difference of this model was that this was the first model to incorporate flaps, up to 40% being available which when used with some power from the engine resulted in an airspeed of less than 20 Knots, these combined with the slots gave full control which was demonstrated on the first flight.

At the express wish of the USAAF, the capability to operate safely from rough and unprepared fields large balloon tyres were tested, (size 600 X 6) and a robust skid made by rca Scott.

The electrical system was the normal military specification: 28 Volts along with a voltage regulator using an engine driven generator, and a powerful starter motor.

In the cockpit the panel instruments were provided with lighting for night flying, a landing light was positioned on the left wing powered by a 24 volt battery.

This definitive model of the Piper L-14 Army Cruiser never went into production as in August 1945, right at the end of the Second World War, the USAAF ceased to have an interest in this model or a need for it.

The five initial aircraft, YL-14, and the other nine L-14 comprised the total production run for this rare aircraft, in all only fourteen were completed.

At the end of the War the USAAF authorised the Piper Aircraft Company to sell these aircraft into the civilian market.

Details of the 14 aircraft produced.

Information from The Cub Club of the USA.

Today there are known to exist a unique example of the YL-14 in the USA and in Spain the unique Piper L-14 Army Cruiser, newly restored and flown in May 2003, owned by D.Jose Luis Olias <www.piperl14.org> of Burgos, Spain. Member of the Vintage Piper Aircraft Club <www.vintagepiper.com> who are proud to be associated with this wonderful aircraft. 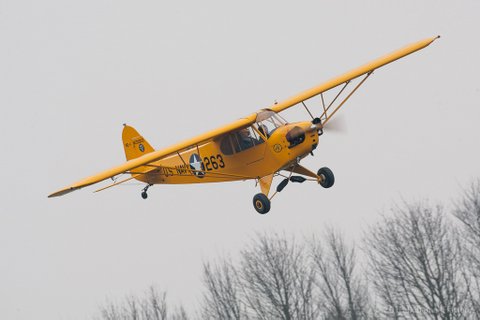